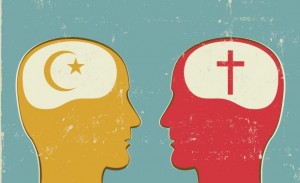 Now I would remind you, brothers, of the gospel I preached to you, which you received, in which you stand,
2and by which you are being saved, if you hold fast to the word I preached to you—unless you believed in vain.
3For I delivered to you as of first importance what I also received: that Christ died for our sins in accordance with the Scriptures,
4that he was buried, that he was raised on the third day in accordance with the Scriptures,

If Jesus did not die on the cross and rise again from the dead, then Christianity is untrue,

1 Corinthians chapter 15:14
And if Christ has not been raised, then our preaching is in vain and your faith is in vain.

God’s work in history is central to Christianity; in fact, we cannot know God apart from history.

God’s act of creation is history. If there was no creation, then there would be nothing for us to know because we would not exist.

Emphasis on history is, in my estimate, one of the big differences between Christianity and Islam, the Bible and Quran. Or to state this in a slightly different manner: history is important to Islam, but not as important as it is in Christianity.  The Quran emphasizes monotheism, and Muslims say God is the center of their belief,

Monotheism is the essence of Islam. It is the affirmation of believing that there is no other divinity other than God. For the most part, the spirit of the Quran revolves around the theme of pure monotheism. Thus, God is the center of a Muslim’s belief. Whereas other religions focus on individuals, for example, Christianity’s focus on Jesus Christ, Islam focuses solely on God. (Sayyid Mustafa al-Qazwini, Discovering Islam)

If Sayyid Mustafa al-Qazwini is correct and “Islam focuses solely on God”, then this is a major difference with Christianity. If and when Muslims read the Bible, they will learn that Christianity focuses on God and what God has done and revealed in history. This explains the Christian emphasis on the Gospel and Jesus’ life, death, and resurrection (1 Corinthians 15:1-4). The life, death, and resurrection of Jesus not only teach us about God’s work, but they teach us about God.

The Quran is not historically true. Therefore it is not a witness to God’s works or His Word.

The Quran was allegedly recited by an angel to Muhammad who then recited to others. Muhammad was a man. He was integral to what was written in the Quran.

However, Muhammad and the compilers of the Quran omitted previous Scripture. Earlier prophets did not omit previous revelation. Nor did Jesus. This is why the Christian Bible contains the Tanakh (Jewish Bible).

Not only did Muhammad omit, but he contradicted previous history as recorded in Scripture. To do such a thing is godless.

The Quran must be the Word of God because it hasn’t changed?

The point to keep in mind is that past history cannot be changed.

The texts recording history can be changed; history can in this sense be “rewritten” or reinterpreted. But you can’t change the events of history. And yet Muhammad in the 7th century tried to change something that happened in the 1st century.

This is most evident in Islam’s denial of Jesus’ death on the cross.

The text of the Quran may be the same today. But this is irrelevant. The Quran is a corruption of history. The fact is that you can’t change in the 7th century something that happened in the 1st century. This means the Quran is not of God.

If the Quran is to be believed, then Muslims must with historical evidence and not speculative imagination. How did the texts we have throughout the centuries end up with Jesus teaching about His death on the cross? Why did Jesus’ closest disciples, like Peter, get it wrong? Islam has a lot of historical explaining to do, but Islam has historically failed in this matter.

Christianity is true and relevant

The Good News of Christianity (Gospel) is true because the events of Jesus’ death and resurrection happened in history,

“They [events pertaining to the Gospel] were true because they happened in history, and things that happen in history are not just true for direct participants, but are true for everyone” (Michael Horton, “Heaven Came Down”; Modern Reformation Nov./Dec. 1995 Vol. 4 No. 6).

One of the reasons students study history, people ready daily newspapers, or check sports scores is because history is true for everyone.

Since the Muslim account concerning Jesus’ death and resurrection did not happen in history, Islam is not true for everyone. Even more seriously, Islam is an untrue report, and falls short of declaring the importance of what God has done in history through Jesus.

Christianity is like other historical events in that the events of the Gospels are true for everyone. But the significance of these events is immeasurably greater than the daily news we watch or read on Msnbc.com; Aljazeera.com; etc. because the Gospel is about God’s saving work in history.