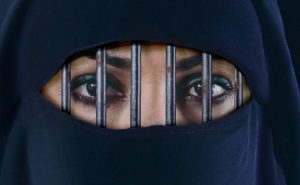 Muta’a marriage is a temporary marriage in Islam. The Encyclopaedia of the Qur’an defines it as a,

Financial contract between a man and an unmarried woman permitting sexual relations for a fixed amount of time upon compensation of the woman…Unlike in the case of permanent marriage (nikāḥ) a temporary wife is not legally entitled to financial support (nafaqa) above and beyond the bride-price, even in the event of pregnancy, unless it is agreed upon beforehand” (Shahla Haeri, “Temporary Marriage” Brill [Leiden and Boston], 2005.  CD-ROM version).

Mut‘a is Arabic for “enjoyment” or “marriage of pleasure” and this arrangement –which is like prostitution — is a scheme for men to take advantage of women.  The traditions of this practice are complex but the Encyclopaedia of Islam1 says,

Here is a story NPR did on muta’a marriage, Abuse Of Temporary Marriages Flourishes In Iraq

According to Al Arabiya a “traveler’s marriage” (nikah misyar),

is a Sunni Muslim marriage contract in which the woman gives up many of the rights she would be afforded under a traditional marriage contract. Although the marriage is official, the couple does not live in the same house and the husband is not required to provide for the wife or for any children they may have. Such marriages are considered an alternative for people who wish to get married but cannot afford a traditional marriage. It is called the “travelers marriage” since it often takes place when men are away from their wives and wish to have relations with another woman.

Sheikh Ali Gomma, the former Grand Mufti of Egypt, has declared that traveler’s marriages (nikah misyar) are legitimate unless banned by the state. Gomma said, “this type of marriage proves the flexibility of Islamic laws in catering to a wide scope of needs and circumstances by offering religiously valid solutions that protect Muslims from committing sins.”

Christians should point out that these “marriages” are nothing more than the religious legalization of lawlessness (Ecclesiastes 3:16).

Muhammad, Marriage, and the Quran