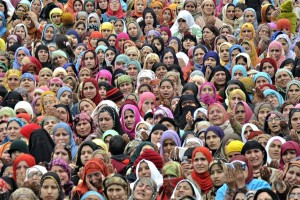 A five year study of 134 countries showed that Muslim countries fared poorly when it come to treatment of women.  17 of the 20 countries women fared worst were Islamic,

The plight of women in Egypt made national attention when CBS reporter Lara Logan was beaten and sexually assaulted by a mob in Tahrir Square while covering the resignation of Egyptian President Hosni Mubarak.   A study by the Egyptian Center for Women’s Rights found that 83% of Egyptian women and 98% of foreign women experience public sexual harassment in Egypt including explicit comments, groping, men exposing themselves and assault.  Yet, most women never report these and those who do are often ignored.  If women don’t have a face/voice in Islamic countries, then knowing how they are treated is not fully possible.

To make matters worse, those bring these kinds of issues up are criticized by others for being guilty of stereotyping as one U.N. official asserted.

Ali Gomaa’s Explanation of Women in Islam and Marriage

As a Christian, I do not want to be guilty of stereotyping because this would be a violation of the 9th commandment.  But I would like to know the truth – what is the role of women in Islam?  What is the teaching of the Qur’an?  What is the teaching and example of Muhammad (sunnah)?  In trying to answer these questions I am faced with the fact that (1) I am a Westerner and non-Muslim; (2) I am a man.

In this and future posts I will be trying to learn from non-Western Muslims and women whether or not Islam oppresses women.  In this post, we’ll be listing to a Muslim man’s explanation, Ali Gomaa.  Ali Gomaa is currently the Grand Mufti of Egypt and one of the world’s most recognizable Muslim scholars.  Here is the video with English subtitles:

Several things struck me as I watched Ali Gomaa.

“A main principle that constitutes our thinking is that the human assembly is ultimately based on the relation between man and woman.”

Ali Gomaa misunderstands the Christian Scriptures beginning at 0:47 seconds.   Ali Gomaa says that God did not “restrict his blame to the woman and He never made her the one responsible for seducing Adam & expelling him from paradise.  As has been written in past holy books; namely that Eve conspired with Satan against Adam and that the woman is a devil!  Yet we see that the Quran made it a shared responsibility.”

As a Christian, this comparison comes across as unlearned.  The Bible does not teach what Ali Gomaa implies.

Furthermore, if Ali Gomaa wants to compare the Bible with the Quran, he should have mentioned that it teaches that both male and female are equally created in the image of God (Genesis 1:26-27).   This is one of the strengths of biblical teaching and beauties of Jesus’ interaction with women during His public ministry.

I agree with Ali Gomaa’s statement, “This Quranic view is different then what it is in past Scriptures…”  (2:20).  However, I don’t agree for the reasons he gave.

Ali Gomaa says that men and women are equal.  We have different functions but are equal.  As a Christian, I have no problems with this.  Ali Gomaa’s comments about men, women, and family are also in line with what Christians, like myself, believe.

You May Also Be Interested in Muhammad’s Treatment of Women:

Muhammad, Marriage, and the Quran