Are wine and alcohol are forbidden in Islam?  Does the Qur’an permit strong drink (intoxicants)?

Here are a few translations of the meaning of Quran 16:67:

This verse about the strong drink (sakar) that comes from dates and grapes is in the context of other good things that Allah gives:

It seems from the above that strong drink is permitted by the Qur’an 16:67. According to the Encyclopaedia of the Qurʾān, “Islamic jurisprudence generally understands the qurʾānic ban of intoxicants to have developed in stages.” 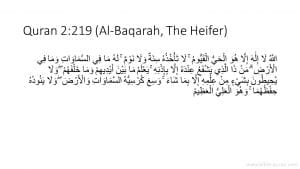 However, Quran 2:219 appears to prohibit wine and other intoxicants.

Here are several translations of Quran 2:219:

Quran 5:90-91 identifies wine and alcohol with the defilement of Satan

Quran 5:90-91 identifies alcohol with a defilement of Satan putting it on the same level as idolatry and divination,

The Quran’s treatment of strong drink and wine, according to some sources, changed over time. 1“The Qurʾān’s ambivalent treatment of wine was resolved by early exegetes, who determined the historical “occasion” upon which God revealed each wine passage. By examining such passages sequentially, qurʾānic commentators noted a gradual diminution in tolerance toward wine consumption. Al-Ṭabarī (d. 310/923; Tafsīr, v, 58) records how God allowed humans to enjoy his gift until they proved incapable of drinking responsibly. After a series of such atrocities, like the Prophet’s uncle mutilating ʿAlī’s camel in a fit of drunkenness, God finally prohibited wine.”
Source: Kueny, Kathryn, “Wine”, in: Encyclopaedia of the Qurʾān, General Editor: Jane Dammen McAuliffe, Georgetown University, Washington DC. Initially, Muhammad spoke about wine alongside other good things Allah gives to mankind: water, milk, and honey.  Several years later it sounds like Muhammad changed his mind identifying alcohol with the devil and no longer Allah’s good gift to mankind. 2“Hadith has many utterances regarding this theme. Wine, is the key of all evil (Ahmad b. Hanbal, Musnad, v. 238; Ibn Madja, Ashriba, bab i). Who drinks wine in this world without repenting it, shall not drink it in the other world (Bukhari, Ashriba, bab i; Muslim, Ashriba, trad. 73, 76-78, etc.). Cursed is he who drinks, buys, sells wine or causes others to drink it (Abu Da’ud, Ashriba, bab 2; Ibn Madja, Ashriba, bab 6; Ahmad b. Hanbal, i. 316; ii. 25, 69, 71, 97, 128, etc.). Who drinks a draught of wine on purpose shall have to drink pus on doomsday (Tayalisi, No. 1134). Prayer of him who drinks wine is not accepted by Allah (Nasa’i, Ashriba, bab. 43; Darimi, Ashriba, bab 3), and faith is incompatible with drinking it (Bukhari, Ashriba, bab i; Nasa’i, Ashriba bab 42, 44). It is even inadvisable to use it as medicine (Muslim, Ashriba, trad. 12; Ahmad b. Hanbal iv. 311, 317 bis etc.); and it is prohibited to use wine for manufacturing vinegar (Tirmidhi, Buyu’, bab. 59; Ahmad b. Hanbal iii. 119, 260 bis). But times will be even worse and there will be people who declare wine allowed (Bukhari, Ashriba, bab 1; Nasa’i, Ashriba, bab. 41, etc.) and so it will be drunk by the generation of the last days (Bukhari, Ashriba, bab i, Ahmad b. Hanbal, iii 176, 202, 213 sq)” (“Khamr” in Encyclopaedia of Islam)

Are you thinking about converting to Islam?

thoughts on “Wine and Alcohol in Islam”