The popular Saudi TV show, Tash Ma Tash (English: “No Big Deal”), recently did a satire where a wife had multiple husbands.  According 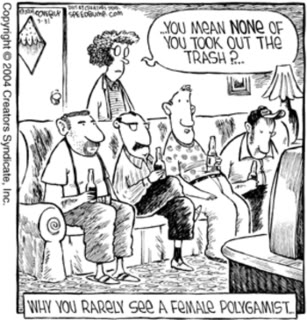 to ArabNews.com (it helps to know that the Qur’an permits men to marry up to four women) 1“Polygyny is clearly sanctioned in the Qurʾān which permits a man to take up to four wives so long as he treats them equally (q 4:3). A later verse in the same chapter (q 4:129) states that it is virtually impossible not to prefer one wife over the others and admonishes the husband not to neglect any of his wives” (Ruth Roded, “Women and the Qurʾān.” Encyclopaedia of the Qurʾān. General Editor: Jane Dammen McAuliffe . Brill [Leiden and Boston], 2005. CD-ROM version

Obviously, some Muslim men were unhappy with this epidode.  Hopefully it will open their eyes to the perspective of women – not an easy thing to do because it probably means closing an eye to the Qur’an.

In the near future I will be posting on the topic of women in Islam.  Please send me any information you think will helpful in my study.