The Synoptic Problem is not a good reason to reject Jesus’ death on the cross for sin, His resurrection, or the Christian Scriptures 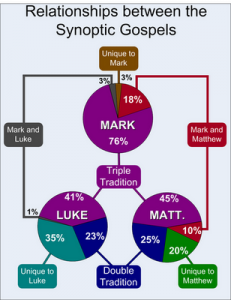 Muslims apologists, in more recent history, focus on the “Synoptic Problem” and allege that the differences undermine the reliability of the New Testament. This has the advantage in keeping Muslims “in the fold” because most have never read the Gospels let alone taken the time to think carefully and prayerfully about the way events in the life of Jesus were recorded. So who does one believe? The Gospel accounts or modern scholars? Where does one even begin?

Let me give five suggestions:

(2) Understand that the Quranic Injeel does not exist and has never existed. Contrary to the Quran, Jesus was never given a book from heaven (cf. Qur’an 5:46; 57:27).2The Quranic Injeel has caused much confusion. Christians rightly point out the reliability of the New Testament, but that really is not the issue. Muslims believe a singular book (Arabic: Injeel) was given to Jesus. Muslims do not believe Jesus was given Matthew, Mark, Luke, John, Acts, Romans, etc. Even if Christians possessed the original copies of the twenty-seven New Testament books, they would not be the book from heaven (Injeel) the Quran says was given to Jesus. The burden of proof is not upon Christians to prove the reliability of the New Testament. The burden of proof is upon Muslims to prove that the Injeel was given to Jesus Who then gave it to His followers.

(3) Read the Gospels for yourself.

The Quranic Injeel is a corruption of the New Testament and Christian Gospels (Quran 5:46-47)