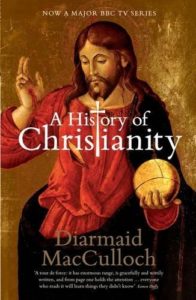 “Within Muhammad’s lifetime – he is generally said to have died in 632 CE – Muslims in Mecca had become a victorious and self-confident community which now needed regulation for its life. Both these experiences are reflected in pronouncements which, during the next century and a half, came to be a fixed and written text – still known despite its written form as ‘that which is to be recited’, or Qur’an. In contrast to the similar transition in fortunes for the followers of Christ witnessed in the Gospels, Acts and Epistles of the New Testament, the Muslims from the earliest days won their survival at least partly by physical force of arms, another phase in the struggles which had convulsed the peninsula over the past century, and their subsequent extraordinary expansion was inseparable from military conquest. Little more than half a century after the first convulsions in Mecca, the Dyophysite Patriarch Henanisho I had the courage to point this out to ‘Abd al-Malik, then Islamic caliph (that is, the leader who claimed to be successor to Muhammad). The Caliph asked him to give his opinion of Islam. The Patriarch replied, ‘It is a power that was established by the sword and not a faith confirmed by divine miracles, like Christianity and like the old law of Moses’.”