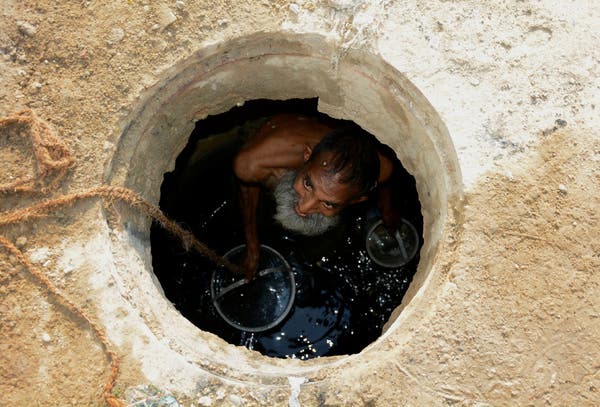 In Pakistan, descendants of lower-caste Hindus who converted to Christianity centuries ago still find themselves marginalized, relegated to dirty jobs and grim fates.

KARACHI, Pakistan — Before Jamshed Eric plunges deep below Karachi’s streets to clean out clogged sewers with his bare hands, he says a little prayer to Jesus to keep him safe.

The work is grueling, and he wears no mask or gloves to protect him from the stinking sludge and toxic plumes of gas that lurk deep underground.

“It is a difficult job,” Mr. Eric said. “In the gutter, I am often surrounded by swarms of cockroaches.”

After a long day, the stench of his work lingers even at home, a constant reminder of his place in life. “When I raise my hand to my mouth to eat, it smells of sewage,” he said.

A recent spate of deaths among Christian sewer cleaners in Pakistan underscores how the caste discrimination that once governed the Indian subcontinent’s Hindus lingers, no matter the religion.

Like thousands of other lower-caste Hindus, Mr. Eric’s ancestors converted to Christianity centuries ago, hoping to escape a cycle of discrimination that ruled over every aspect of their lives: what wells of water they could drink from, what jobs they could hold.Manual sewer cleaners, known as sweepers, are at the bottom of that hierarchy, the most untouchable of the untouchable Hindu castes.

But when the Indian subcontinent broke up in 1947 and Pakistan was formed as a homeland for the region’s Muslims, a new, informal system of discrimination formed. In Pakistan, Muslims sit at the top of the hierarchy. And as one of Pakistan’s small Christian minority, Mr. Eric has now been forced into the same work his Hindu ancestors had tried to avoid through religious conversion.

Although India has outlawed caste-based discrimination with mixed success, in Pakistan it is almost encouraged by the state. In July, the Pakistani military placed newspaper advertisements for sewer sweepers with the caveat that only Christians should apply. After activists protested, the religious requirement was removed.

But municipalities across Pakistan rely on Christian sweepers like Mr. Eric. In the sprawling port city of Karachi, sweepers keep the sewer system flowing, using their bare hands to unclog crumbling drainpipes of feces, plastic bags and hazardous hospital refuse, part of the 1,750 million liters of waste the city’s 20 million residents produce daily.

Mr. Eric sends his son to school far from the crowded and segregated neighborhood the city’s sewer cleaners live in, hoping to free him of the discrimination that forced him into this work. Back home, the neighborhood lacks safe drinking water and schools. Swarms of mosquitoes, piles of garbage and overflowing gutters are the area’s only abundance.

While most sweepers like Mr. Eric are illiterate, his generation has been more determined to push their children to attend school to break the cycle of discrimination, just as their ancestors tried to do when they converted. But the children still find themselves discriminated against, forced to adopt the profession of their fathers.

Mary James Gill, a former parliamentarian who runs the Sweepers are Superheroes advocacy group, has lobbied for years to pressure the government to formally ban manual sewage cleaning work. But most of the sweepers are illiterate and unorganized, she said, making it easy for the authorities to pressure them to accept the jobs as their only means of income.

While Christians make up only 1.6 percent of Pakistan’s population of some 200 million, according to a 1998 government census, rights groups believe they fill about 80 percent of the sweeper jobs. Lower-caste Hindus mostly fill the rest of the slots.

When Karachi’s municipality tried to recruit Muslims to unclog gutters, they refused to get down into the sewers, instead sweeping the streets. The job was left to Christians like Mr. Eric, known derogatorily as “choora,” or dirty.

They spend hours inside the city’s sewers. Almost all of them develop skin and respiratory problems because of constant contact with human waste and toxic fumes. And for some, the job has been lethal.

“I have seen death from very near,” said Michael Sadiq, legs trembling as he thought about his two-decade career as a sweeper.

Last August, Mr. Sadiq and his relatives, Rafiq Murad and Riaz Masih, sweepers for Karachi’s municipality, were relaxing on their only day off when they were interrupted by a call from their supervisor, ordering them to snap to it.

Mr. Murad was the first to step into a gutter 18 feet deep with a rope tied around his waist. As he cleaned the detritus, a flood of putrid black water carrying sand, stones, sludge and a swarm of gases swept him away.

Mr. Sadiq scrambled into the sewer to save his cousin but was overwhelmed by the toxic mix and fainted. Mr. Masih followed to help his cousins, but the fumes asphyxiated him, his lifeless body swept away without a struggle.

While Mr. Sadiq and Mr. Murad were saved, Mr. Masih was buried so deep, an excavator worked for four hours to extract his dead body from the stinking sludge it was buried under.

“This work has become so dangerous that I need to find a way out,” Mr. Sadiq said. But he, like the rest of the sweepers, is a poor and illiterate Christian, and no other jobs are open to him, he lamented.

Two months after Mr. Masih died, two more sewer cleaners died on the job a few miles away. Another sweeper died at the beginning of this month.

Doctors often refuse to treat the sweepers, who are seen as unclean and untouchable.

Officially, Pakistan denies the existence of caste-based practices in the country. But across the country, the discrimination persists.

One form of abuse commonly meted out on Pakistan’s religious minorities has been to accuse them of blasphemy, a crime that is punishable by death in the country, and that at times has been used to settle personal disputes.

In one infamous case in 2010, Asia Bibi, a Christian woman, was sentenced to death, accused of blaspheming Islam. It later emerged that her Muslim colleagues had ordered her to fetch water as they harvested berries on a hot day. When she drank from the communal cup, they accused her of polluting it and an argument ensued.

The case was eventually thrown out for lack of evidence, after Ms. Bibi spent eight years on death row and her family was forced into hiding by the death threats they received.

Pakistan has taken a few steps to protect and empower some minorities, but the efforts have failed to help much. A bill was passed in 2009 to reserve 5 percent of all government jobs for non-Muslims. But over a decade later, that goal has not been reached, officials say.

Mr. Eric feels it is only a matter of time before he dies on the job. But he hopes his son can excel in school and shake off the discrimination that has plagued the family for generations.

“After hearing of the deaths in the gutters, I think about what will happen to my family if I die,” Mr. Eric said. “But Jesus Christ will take care of them.”“I don’t care about my life as long as I can provide my family with a decent living.”