A Pew Forums report forecasts that the number of Muslims around the world will grow over the next 20 years from 1.6 billion in 2010 to 2.2 billion by 2030.  After this it will level off as Muslim women get educations and jobs, people migrate to cities, and living standards improve.  If current trends continue, the report goes on to say, Muslims will make up 26.4% of the world’s total projected population of 8.3 billion in 2030, up from 23.4% of the estimated 2010 world population of 6.9 billion. 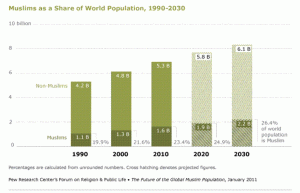 Amaney A. Jamal, associate professor of politics at Princeton and a consultant for Pew on global Islam, said,

“There’s this overwhelming assumption that Muslims are populating the earth, and not only are they growing at this exponential rate in the Muslim world, they’re going to be dominating Europe and, soon after, the United States,” she said. “But the figures don’t even come close. I’m looking at all this and wondering, where is all the hysteria coming from?”

The Future of the Global Muslim Population: Projections for 2010-2030