Ramadan in the Quran 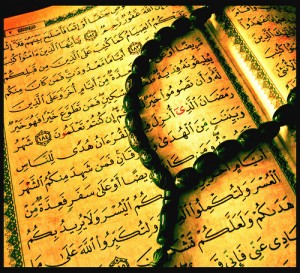 Ramadan begins this year on May 5 and is the month in which Muslims celebrate Muhammad first receiving the revelation of the Quran. Ramadan is the only month of the year mentioned in the Quran:

The month of Ramadan in which was revealed the Quran, a guidance for mankind and clear proofs for the guidance and the criterion (between right and wrong). So whoever of you sights (the crescent on the first night of) the month (of Ramadan i.e. is present at his home), he must observe Saum (fasts) that month, and whoever is ill or on a journey, the same number [of days which one did not observe Saum (fasts) must be made up] from other days. Allah intends for you ease, and He does not want to make things difficult for you. (He wants that you) must complete the same number (of days), and that you must magnify Allah [i.e. to say Takbir (Allahu-Akbar; Allah is the Most Great) on seeing the crescent of the months of Ramadan and Shawwal] for having guided you so that you may be grateful to Him.  (2:185; translated by Muhsin Khan).

Why is Ramadan important to Muslims?

Ramadan is important to Muslims because they believe that at this time:

What do Muslims do during Ramadan?

According to the Encyclopaedia of the Qur’an:

The month of Ramaḍān is a time of extra prayers at night (ṣalāt al-tarāwīḥ) and often of added devotions and religious studies during the day, when Muslims (except the sick, old, travelers or menstruating women) should observe a total fast from all food, drink and sexual intercourse. All of these are allowed at nighttime, however, and in some countries the breaking of the fast at the time of the sunset prayer (often accompanied by giving of food to the poor) is a time of celebration and feasting. In urban areas, offices and businesses might alter their work hours to accommodate the fast, closing at noon and reopening in the evening, and families visit each other at night. In the “popular quarters” of Cairo, residents hang out colored lamps during Ramaḍān, and there are special displays of folkloric dances and Ṣūfī  dhikr at nighttime.

Why do Muslims fast during Ramadan?

Muslim fast during Ramadan because

The Qurʾān says in verse 2:183, “Fasting is prescribed for you as it was for those before you, that you may learn piety (or protect yourself, laʿallakum tattaqūn).” Ḥadīths tell us that before the institution of Ramadan, Muslims observed the pre-Islamic fast of ʿĀshūrāʾ in the month of Muḥarram. After the emigration from Mecca to Medina, according to ḥadīth, the Prophet learned from the Jews that ʿĀshūrā was the day when Moses and the Israelites were rescued from the hand of Pharaoh. Muḥammad told the Jews, “We are closer to Moses than you,” and ordered the Muslims to observe it. But when the fast of Ramaḍān was instituted, the fast of ʿĀshūrāʾ was made optional (Muslim, Ṣaḥīḥ, ii, 548-51) (Encyclopaedia of the Qur’an).

How I Observe Ramadan as a Christian?

As a Christian, I don’t observe Ramadan with fasting. However, I remember at this time of the year to pray for Muslims. Here’s a helpful prayer resource: