What do Muslims do during Ramadan? 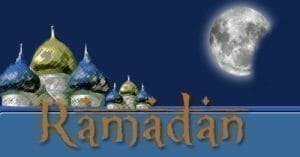 According to timeanddate.com, “Ramadan is a month of fasting for many Muslims in the United States. Fasting during Ramadan is one of the Five Pillars (fundamental religious duties) of Islam…People of Islamic faith are encouraged to read the entire Qur’an during Ramadan. Some Muslims recite the entire Qur’an by the end of Ramadan through special prayers known as Tarawih, which are held in mosques every night of the month, during which a section of the Qur’an is recited. Ramadan is also a month for acts of charity.”

Muslims believe that the breath of a person who is fasting is sweeter than the fragrance of musk to God. After sunset, the fast is broken (iftar).

Ramadan is the only month of the year mentioned in the Qur’an,

Ramadan is the (month) in which was sent down the Qur’an, as a guide to mankind, also clear (Signs) for guidance and judgment (Between right and wrong). So every one of you who is present (at his home) during that month should spend it in fasting, but if any one is ill, or on a journey, the prescribed period (Should be made up) by days later. Allah intends every facility for you; He does not want to put to difficulties. (He wants you) to complete the prescribed period, and to glorify Him in that He has guided you; and perchance ye shall be grateful. (2:185; translated by Yusuf Ali).

Ramadan terminates with the “little festival” called Eid al-Fitr (June 4, 2019). No fasting is allowed at all during this festival.

Was it really the Angel Gabriel who spoke to Muhammad?

You may also be interested to read and explain:

If the Quran was a revelation from heaven, then why is it mistaken and unclear about Jesus’ death on the cross?