I have been studying chapter 6 of the Quran.  My teacher has been Ali Gomaa; a leading Islamic scholar and jurist who studied and taught for many years at Cairo’s Al-Azhar University.  This is episode 6 of 19.

“And He is Allah in the heavens and in the earth; He knows your secret (thoughts) and your speaking aloud and He knows whatever you are earning.” (Quran 6:3)

“These are the characteristics upon which Muslim’s creed settled.  He is the Ever-Determiner over everything and the Ever-Knowing of everything.”

“The issue here is about believing in the existence of Allah.  Because if you don’t believe in the existence of Allah and witness something strange in this world, such as the miracle of a Prophet or a blessing of a pious worshipper, then you might belie it.  You don’t believe in the existence of Allah in the first place.  And if you say that there is a god, but he created the creation and left it, to be self-sustained then you are denying revelation.  Accordingly you will deny the message and that we are entrusted yet also deny the sacred books.  You will refute the idea that Allah chooses to reveal things to whomever about whatever.  Believing in Allah and revelation is a must.”

“If you say, yes there is a god and revelation, but this Prophet is not a Prophet, then you are refusing to believe in one of Allah’s Prophets.  You have then reached a dead end, since you do not believe in that Prophet.  You do not believe in his book or message or any of that.

The six pillars of faith

“On the other hand if you say, yes I believe in this Prophet, but not his book, or if you denied the book and believed in him, then denied that there is a Judgment Day, all of this insults the faith.  Hence the pillars of Faith are six, while the pillars of Islam are five.”

“The pillars of Faith are: to believe in Allah, His angels, His books, His Prophets, Judgment day and Allah’s decree whether good or bad.  We keep on repeating them and going through them as they are the pillars of Faith.  If one of those pillars is suffering then Faith does not exist anymore.  But why are we so persistent, isn’t it just enough for an individual to be kind and well-mannered?  Believing in Allah does not have to be required.  Nor is believing in His books, well no, or His messengers, or Judgment Day, no this is not acceptable.  Our faith is compromised if we denied one of the pillars of Faith.  This ayah refers to these principles.”

The meaning of “Ayah”

“The word ‘Ayah’ could mean miracles, or mean an ayah or a verse that we read in the noble Qur’an.  But he denies this and that and even prophecy and the message, since he does not believe in Allah.  Even if he believed in the existence of Allah and denied the message, then he would still be a disbeliever.  The same goes if he generally accepted the message, but denied it to one of the Prophets.   Hence we arrive at the reason for this strange and bizarre phenomena, which is refuting what Allah has bestowed upon us Glorified and Exalted Be He.  Whether it is an ayah in the sense of a miracle, or an ayah meaning a judgment or duty.”

Christianity, the Bible, and the Quran

Muslims believe what Muhammad said about the Prophets.  Muslims do not believe or read what these prophets actually said.

For example, Muslims say they believe in Jesus, but the reality is that they only believe in what Muhammad said about Jesus.  Most Muslims reject the New Testament.

Muslims say they believe in God, but they reject God’s work in history in the death of Jesus on the cross and His resurrection from the dead.  This is one of the clear evidences why the Quran is not the Word of God, and I invited you to learn more by reading my book, Is the Qur’an the Word of God?

I have been noticing that when the camera pans out to the audience that the same clips are being used.  For example, this clip is show multiple times in multiple episodes, 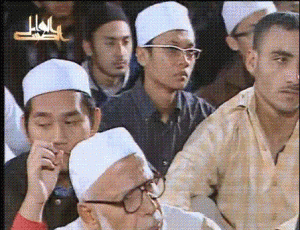