This post looks at whether Quran manuscripts perfectly preserve what Muhammad recited.

My conclusion is that today’s Quran seems to faithfully preserve what Uthman collected, but significant textual variants exist between the time of Muhammad to the time of Uthman.

What does the Quran teach about its preservation?

Devout Muslims believe the Quran is the Word of God, unchanged and unalterably transmitted from the time of Muhammad.1

It is “flawless” and fixed by an “imperishable tablet” and “not to be doubted.” To question otherwise is like “telling a Christian that Jesus was gay” as Abdou Filali-Ansary, a Moroccan scholar, put it.2

Muslims base their belief in the perfect preservation of the Quran from passages in the Quran in which Allah promises to perfectly preserve it:

Are there any textual variants in Quran manuscripts?

Traditionally there are seven readings (qira’at) of the Quran going back to Muhammad. Muslims believe these readings are based on different regional dialects over the pronunciation of the Quran.3

Some twenty years after Muhammad’s death, these readings were  collected and standardized by Uthman.4

The King Fahad Quran Complex in Saudi Arabia prints two different readings: the Hafs and Warsh versions of the Quran.5

Here is an example of a difference:6

Since different readings are part of Uthmanic text tradition, it is counterproductive to insist that these invalidate what the Quran says about its preservation (Quran 15:9; 85:21-22).

However, Christians should use the qira’at to explain that differences between the Gospels do not invalidate them from being the Word of God.7

What can also be productive, as we will see below, is comparing copyist mistakes in Quran manuscripts and pre-Uthmanic Quran variants with similar kinds of variants in biblical manuscripts to show that variants do not invalidate a text from being the Word of God.

We must nevertheless take into consideration that there are over 250,000 manuscripts of the Qur’an scattered all over the globe. When comparing them it is always possible to find copying mistakes here and there; this is an example of human fallibility, and has been recognized as such by authors who have written extensively on the subject of “unintentional errors.” Such occurrences cannot be used to prove any corruption within the Quran (The History of The Qur’anic Text: From Revelation to Compilation: A Comparative Study with the Old and New Testaments [Leicester: UK Islamic Academy, 2003], 13).8

This is helpful to understand because Muslims often claim that the Bible has been corrupted (tahrif) and point out that there are hundreds of thousands of variants in biblical manuscripts.9

But the vast majority of these are unintentional copyist errors, the kind found in Quran manuscripts (e.g. spelling variations).

Why are there few meaningful and viable variants in Quran manuscripts?

A meaningful variant is something that changes the meaning of the text. A viable variant is one that is plausibly original. For biblical studies, probably less than 1% of New Testament variants are both meaningful and variable.10 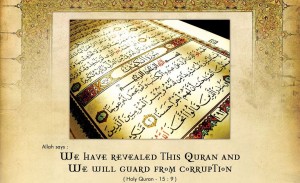 The typical answer Muslims give as to why there are few (or no) meaningful and viable Quran manuscript variants is belief that Allah will preserve the Quran in its original form until the Last Day (Quran 15:9; 85:21-22).

Francois De Blois, Teaching Fellow at the Department of the Study of Religions at the School of Oriental and African Studies in London, gives another reason for the lack of variants in Quran manuscripts:

…that the virtual absence of real textual variants in the Qur’an is the result of the fact that the transmission of the Qur’an has always been primarily through oral rather than through written tradition. The situation is similar with that of the Vedas, which were composed much earlier than the New Testament or the Qur’an and transmitted for many centuries exclusively orally. In the Vedas there are actually no real textual variants. But this means that the methodology of textual criticism and source-criticism, as applied with such success to the New Testament, cannot be transferred automatically to the Qur’an. A different kind of source requires a different kind of methodology (Francois De Blois, “Islam in Its Arabian Context.” In The Quran in Context, edited by Neuwirth, Sinai, and Marx [Brill 2010], pp.618, 619).

Destruction of meaningful and viable variants

Another plausible reason for a lack of meaningful and viable variants in Quran manuscripts is that they were destroyed Uthman.12

But if any scrap of parchment falls into our inquisitive hands and, despite our best allowance for orthographic differences, fails to slip comfortably into the Uthmani skeleton, then we must cast it out as distorted and void (The History of The Qur’anic Text: From Revelation to Compilation: A Comparative Study with the Old and New Testaments [Leicester: UK Islamic Academy, 2003], 205).13

Destruction of potentially meaningful and viable variants doesn’t mean variants never existed. It means that they no longer exist and therefore cannot be studied.14

There isn’t a critical edition of the Quran

Adding to the confusion is that a critical edition of the Quran has never been published.

Are there any meaningful and viable variants in the Yemeni Quran manuscripts?

In 1972, some 12,000 Quranic parchment fragments were discovered in the Great Mosque in the Yemeni capital Sana’a. These fragments consist of tiny snippets of the Quran to whole folios belonging to some 926 copies of the Quran. To date, only a small portion of the fragments have been published, and it is unknown when the rest will be published.

According to Stefan Wild, a leading scholar in the Quran and Arabic lexicography wrote that the find at Sana had not yet produced any meaningful variants:

The earliest written Qur’anic fragments we know have a number of important orthographic and ornamental peculiarities like those found in the recently discovered Yemeni manuscripts from Sanaa, some of which may go back to the seventh century. But so far, no substantial textual difference has been found between these early documents and the Qur’anic text as we know it.16

Though certainly a great treasure containing a wealth of orthographic oddities, the Mushafs in Sana do not add anything new or substantial to the body of proof which already demonstrates the Quran’s completion within the first decades of Islam.17

More recently however, Behnam Sadeghi, Mohsen Goudarzi, and Uwe Bergmann have written about a palimpsest found at Sana’a.18 It dates from the the first half of the seventh century AD; it does not belong to the Uthmanic textual tradition;19 and it contains textual variants from the Uthmanic tradition.

Examples of Major Variants in the Sana’a palimpsest (a.k.a. C-1 or the lower writing of Saṇʿāʾ 1)
(Behnam and Goudarzi, 21)20

This is manuscript evidence that differences in the Quran are more than just dialect and pronunciation. The Sana Quran may be evidence for non-Uthmanic versions of the Quran to which literary sources also give evidence.21

The Uthmanic Quran may not contain corruption, but it is guilty of corruption

Textual history, contrary to what many Muslims believe, is not reason for dismissing the Christian and Jewish Scriptures as corrupt. For Muslims to argue otherwise would be to argue against the Quran.22

The real corruption, comment below if you think otherwise, is that the Quran does not preserve what God revealed and omits the books of Moses, Prophets, the Psalms, and the Gospels. The Qur’an invents a book given to Jesus that it calls the Injeel. Muslims have searched for this Injeel and resorted to corruptions such as the Gospel of Barnabas.

Watch, Is the Bible Reliable?

What every Muslim should know about the Bible and Injeel

Are there copyist errors in Quran Manuscripts?

One thought on “Quran Manuscripts, Copyist Errors, and Viable Variants”