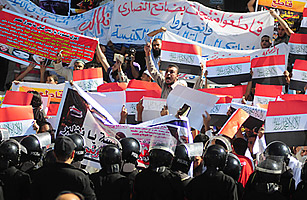 Time Magazine featured a story about the Egytpian Coptic Church, the head of which is Pope Shenouda III.  The highlights:

While there are many rumors floating around about Camilia Shehata, we can say with certainty tht the Christian Scriptures permit divorce.  The Apostle Paul teaches,

Yet if the unbelieving one leaves, let him leave; the brother or the sister is not under bondage in such cases, but God has called us to peace.  (1 Corinthians 7:15)

If Camilia Shehata has left the faith and converted to Islam, then she is no longer a believer.  If she also wants to leave her husband, then the husband is obligated to let her leave.  It therefore sounds like the lack of peace in Egypt over Camilia Shehata is because the Egyptian Coptic Church is not following the Word of God.

Are you interested to reach Muslims with the Gospel? Then you need to learn more about the Qur’an and especially the Qur’anic Injil. Check out: