One of the oldest Quran manuscripts is the Uthman Quran so called because some believe it belonged to Uthman. If this is an original Uthmanic text the date of it would be about AD  651 (about 20 years after Muhammad’s death). This is sometimes called the Tashkent Quran 1Tashkent, the capital of Uzbekistan, is the city where this Quran is kept. It is found in the library of the Telyashayakh Mosque or the Samarkand 2 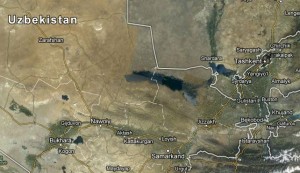 Samarkand, Uzbekistan is one of the cities where this Quran manuscript used to be kept. manuscript. About 1/3 of the original remains. 3According to Wikipedia, “it begins in the middle of verse 7 of the second sura and ends abruptly at Surah 43:10” (Uthman Quran).

Possibly older than the Uthman Quran is the Sana palimpsest.

Results from radiocarbon dating from a Sana Quran parchment:

What other ancient Quran manuscripts are there?

Muhammad Mustafa Al-Azami, Professor Emeritus at King Saud University, argues that the following list of manuscripts “have been conclusively dated to the first century A.H.” 4The History of the Quranic Text from Revelation to Compilation, 316-317. Al-Azami basis his list on Kurkis Awwad’s,  Aqdam al-makhtutat al-Arabiyah fi maktabat al-Alam, pp.31-59.

Nevertheless, considering that Muhammad died around 632 AD, these are still old Quran manuscripts.

Did the Angel Gabriel reveal the Quran to Muhammad?

Uthman’s Collection of the Quran

An example of Muhammad’s corruption of Scripture: Quran 33:37

thoughts on “What is the Oldest Quran”