Islam’s Prophet Muhammad died on June 8, 632.  Some of Muhammad’s last wishes are recorded in the hadiths,

Ibn ‘Abbas said, “Thursday! What (great thing) took place on Thursday!” Then he started weeping till his tears wetted the gravels of the ground . Then he said, “On Thursday the illness of Allah’s Apostle was aggravated and he said, “Fetch me writing materials so that I may have something written to you after which you will never go astray.” The people (present there) differed in this matter and people should not differ before a prophet. They said, “Allah’s Apostle is seriously sick.’ The Prophet said, “Let me alone, as the state in which I am now, is better than what you are calling me for.” The Prophet on his death-bed, gave three orders saying, “Expel the pagans from the Arabian Peninsula, respect and give gifts to the foreign delegates as you have seen me dealing with them.” I forgot the third (order)” (Ya’qub bin Muhammad said, “I asked Al-Mughira bin ‘Abdur-Rahman about the Arabian Peninsula and he said, ‘It comprises Mecca, Medina, Al-Yama-ma and Yemen.” Ya’qub added, “And Al-Arj, the beginning of Tihama.”) 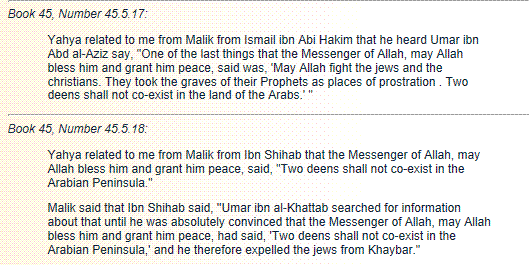 Compare this with some of last words Jesus spoke on the cross,

Luke Chapter 23 verses 33-34
When they came to the place called the Skull, there they crucified him, along with the criminals—one on his right, the other on his left.
Jesus said, “Father, forgive them, for they do not know what they are doing.” And they divided up his clothes by casting lots.