Muhammad’s Death, Mubahala, and the Trinity

Muhammad rejected the person and work of Jesus. In the third chapter of the Quran, Muhammad proposed a mutual cursing (mubahala) with Christians from Narjan (modern day Yemen) to settle differences about Jesus.

Then whoever disputes with you concerning him [‘Iesa (Jesus)] after (all this) knowledge that has come to you, [i.e. ‘Iesa (Jesus)] being a slave of Allah, and having no share in Divinity) say: (O Muhammad SAW) “Come, let us call our sons and your sons, our women and your women, ourselves and yourselves – then we pray and invoke (sincerely) the Curse of Allah upon those who lie.” (Quran 3:61)

It seems that the Christians opted out from the curse. However, did the curse Muhammad proposed still fall upon him and his household? It appears so, because around this time Muhammad’s son died. After the proposed mubahala, Muhammad died. His beloved daughter, Fatima, died shortly after.

I don’t read Quran 3 and say, “Look at how greatly Muhammad and his household were blessed around the time of his proposed mubahala.” It’s just the opposite. Quran 3 verses 59-62 seems clear that Muhammad was standing on the wrong side of Christology.

Reread Quran 3:59-62 and tell me if and why you agree or disagree with my argument: 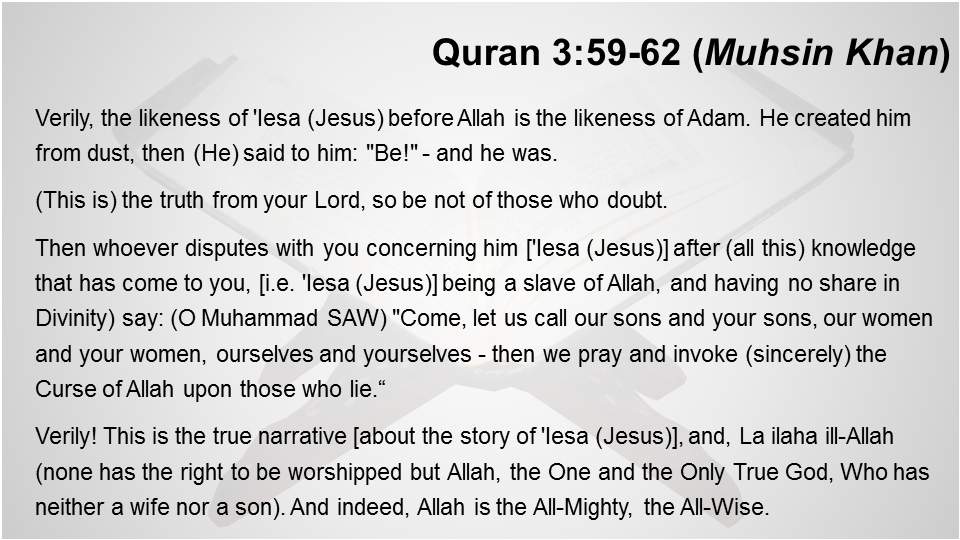