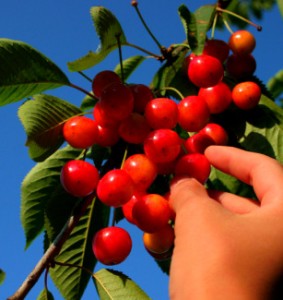 Muhammad Mustafa Al-Azami is one of the world’s leading scholars of Hadith and Azami is Professor Emeritus at King Saud University. What I want to look at in this post is Muhammad Mustafa Al-Azami’s cherry picking Bart Ehrman’s 1Bart Ehrmann is a former Christian, a New Testament scholar, a New York Times bestselling author, and teaches at the University of North Carolina at Chapel Hill. writing.

Cherry picking is a bias in which some evidence is accepted while other inconvenient evidence is ignored. Think of a cherry picker who only picks the best and ripest cherries. A person in the store might come to the wrong conclusion that all cherries on the trees must be ripe and healthy, when in fact, they probably weren’t.

There were many unorthodox view of Jesus in the early centuries of Christianity.

Many Muslims cherry pick Bart Ehrman in trying to discredit the reliability of the Bible; in fact, he has become a kind patron saint in Muslim apologetics.

In his book defending the Quran over and against the Christian Scriptures, Azami quotes Ehrman about the different beliefs and practices in the early centuries of Christianity:

[T]here were, of course, Christians, who believed in only one God; others, however, claimed that there were two Gods; yet others subscribed to 30, or 365, or more…Some Christians believed that Christ was somehow both a man and God; others said that he was a man, but not God; others claimed that he was God, but not a man; others insisted that he was a man who had been temporarily inhabited by God. Some Christians believed that Christ’s death had brought about the salvation of the world; others claimed that this deat had not bearing on salvation; yet others alleged that he had never even died. (quoted in Al-Azami, The History of the Quranic Text from Revelation to Compilation, 277).

Here is where it gets a little more interesting.

Bart Ehrman notes that in the early centuries of Christianity that there were some “Christians” who alleged that Jesus “never even died.” What should we conclude from this? Should we conclude that Jesus did not die on the cross? Al-Azami would like to come to this conclusion, but this is where we can begin to watch him cherry pick.

Al-Azami quotes Ehrman which might suggest that the historical event of Jesus’ death on the cross is questionable along with certain Christian doctrines. Al-Azami would have his readers to believe that the true teachings and life of Jesus were “drowned by other competing influences.”

In order for Islam to support its unorthodox and ahistorical view of Jesus,  3Examples of Islam’s ahistorical Jesus include Muslim rejection of Jesus’ death on the cross and beliefs about Jesus’ future return and death. Muslims have argued that the Christian Scriptures have been corrupted. Again, Azami calls Bart Ehrman to his defense:

The Orthodox Church, being the sect which eventually established supremacy over all the others, stood in fervent opposition to various ideas (‘heresies’) which were in circulation. These included Adoptionism (the notion that Jesus was not God, but a man); Docetism (the opposite view, that he was God and not man); and Separationism (that the divine and human elements of Jesus Christ were two separate beings). In each case this sect, the one that would rise to become the Orthodox Church, deliberately corrupted the Scriptures so as to reflect its own theological visions of Christ, while demolishing that of all rival sects (Al-Azami, The History of the Quranic Text from Revelation to Compilation, 277; Azami cites Bart Ehrman’s The Orthodox Corruption of Scripture, p.xii.)

But does Bart Ehrman believe that the original teaching of Jesus will support Islam? Does Bart Ehrman believe Jesus taught that He would one day return and kill all pigs and destroy all crosses? 4Many Muslims believe Jesus will return east of Damascus, dressed in yellow robes with his head anointed.  He will join the Mhadi and kill the  Antichrist ushering in a period of peace.  According to a tradition in Sahih al-Bukhari:

Allah’s Apostle said, “The Hour will not be established until the son of Mary (i.e. Jesus) descends amongst you as a just ruler, he will break the cross, kill the pigs, and abolish the Jizya tax. Money will be in abundance so that nobody will accept it (as charitable gifts)” (Volume 3, Book 43, Number 656). Does Bart Ehrman believe Jesus was a Muslim? Not to my knowledge. What needs to be appreciated is that the Muslims Scripture and hadiths are yet another later corruption about Jesus—the kind of corruption Bart Ehrman wrote about in Al-Azami’s above quote!

Furthermore, I think that Al-Azami has misread Bart Ehrman when it comes to the “corruption” of Scripture. Bart Ehrman wrote:

Bruce Metzger is one of the great scholars of modern times, and I dedicated the book to him because he was both my inspiration for going into textual criticism and the person who trained me in the field. I have nothing but respect and admiration for him. And even though we may disagree on important religious questions—he is a firmly committed Christian and I am not—we are in complete agreement on a number of very important historical and textual questions. If he and I were put in a room and asked to hammer out a consensus statement on what we think the original text of the New Testament probably looked like, there would be very few points of disagreement—maybe one or two dozen places out of many thousands.

The position I argue for in ‘Misquoting Jesus’ does not actually stand at odds with Prof. Metzger’s position that the essential Christian beliefs are not affected by textual variants in the manuscript tradition of the New Testament. 5Ehrman, Misquoting Jesus: The Story Behind Who Changed the Bible and Why, first paperback plus edition(San Francisco: HarperSanFrancisco, 2007), 252.

Azami would have us to believe that essential Christian beliefs have been lost because of the alleged corruption of the Bible. But Bart Ehrman doesn’t seem to hold this view.

Finally, Al-Azami needs to prove that the Injeel, a book not to be confused with the four gospels, was given to Jesus who in-turn gave the Injeel to his followers. The fact is that no such book exists except in Quranic imagination.