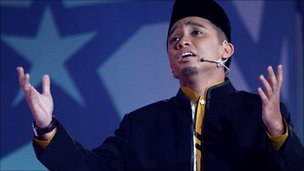 A 26-year-old religious scholar has been chosen as the winner of a Malaysian TV talent show searching for a top young imam, or Muslim leader.

In Friday’s live TV final, Muhammad Asyraf saw off the last of nine other contestants vying to win Young Imam.

He had survived 10 weeks of written and practical tests, which included reciting Koran verses, washing a dead body for burial and slaughtering sheep.

His prize includes a scholarship to a Saudi university and a trip to Mecca.

The prime time TV show, which followed the reality-TV formula of programmes like the X-Factor and American Idol, had proved a popular hit in Malaysia and had gained worldwide attention.

On being chosen as the winner by the programme’s judge, an Islamic scholar and former imam, Mr Asyraf was “crowned” with a white Islamic skullcap.

“I feel good. Thanks to my parents, my wife and my fellow villagers who have been supporting me,” AFP quoted him as saying. 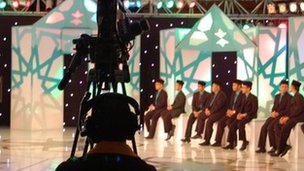 Mr Asyraf’s prize package includes a scholarship to al-Madinah University in Saudi Arabia, a job as prayer leader in a major mosque in Kuala Lumpur, a car and an all-expenses paid pilgrimage to Islam’s holiest site, Mecca.

More than 60% of Malaysia’s population of 28 million are Muslim.

The producers of the programme, which was broadcast by Muslim lifestyle satellite channel Astro Oasis, said that it was aimed at helping young Muslims engage with religion, by teaching them what it takes to be an imam and that an imam’s work extends beyond the mosque into all aspects of Islamic life.

The candidates underwent the same training as other aspiring imams do, such as formal testing on religious theory and knowledge.

What you need to know about the Bible