Lailat-al-Miraj is a significant event in the Islamic calendar. Muslims celebrate Lailat-al-Miraj as the day when Muhammad ascended into heaven (27th day of Rajab). According to tradition, Muhammad was visited by two archangels who filled his heart with knowledge and faith. Muhammad travelled from Mecca to Jerusalem on a winged creature called Buraq. Muhammad then ascended into heaven where he was told the duty of Muslims to recite Salat (prayer) five times each day. 1For the full tradition see Bukhari 5:58:227.

Part of the quranic basis for Lailat-al-Miraj is Quran 17:1, 2According to the Encyclopaedia of the Quran,

this quranic text and others is tenuous ground for arguing that Muhammad ascended into heaven for two reasons, In the first place, the ascent is not described and the term miʿrāj is not used in the Qurʾān. Secondly, the Quran stresses that Muḥammad brings no miracle other than the divinely-wrought miracle of the Quran itself. Even so, key quranic passages are woven through the post-quranic narrative of Muḥammad’s ascent. (Michael Sells, “Ascension). 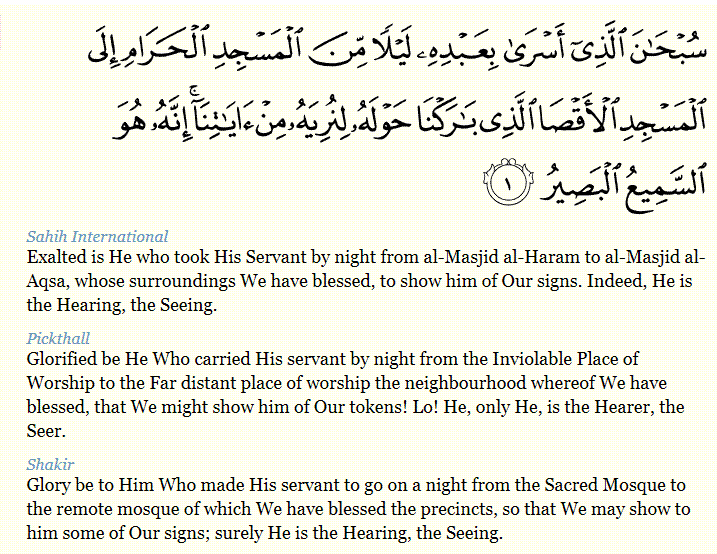 The Encyclopaedia of Islam relates the following about Lailat-al-Miraj,

“Hadīt̲h̲ gives further details of the Prophet’s ascension. Here the ascension is usually associated with the nocturnal journey to Jerusalem, so that the ascent to heaven takes place from this sanctuary. We also have accounts preserved which make the ascension start from Mecca and make no mention of the journey to Jerusalem. In one of these the ascension takes place immediately after the “purification of the heart” (see Buk̲h̲ārī, Ṣalāt, bāb 1; Ḥad̲j̲d̲j̲), bāb 76; Manāḳib, bāb 42; Aḥmad b. Ḥanbal, Musnad, iv. 207, v. 143; Ṭabarī, ed. de Goeje, i. 1157 sq.). In the last mentioned passage we read: “When the Prophet had received his revelation and was sleeping at the Kaʿba, as the Ḳurais̲h̲ used to do, the angels Gabriel and Michael came to him and said: With regard to whom have we received the order? Whereupon they themselves answered: With regard to their lord. Thereupon they went away but came back the next night, three of them. When they found him sleeping they laid him on his back, opened his body, brought water from the Zamzam well and washed away all that they found within his body of doubt, idolatry, paganism and error. They then brought a golden vessel which was filled with wisdom and belief and then his body was filled with wisdom and belief. Thereupon he was taken up to the lowest heaven.”1

Muhammad’s heart was purified on Lailat-al-Miraj?

Striking to me is the above tradition that on Lailat-al-Miraj Muhammad’s heart was purified from doubt, idolatry, paganism, and error. This stands in sharp contrast to Jesus, who is described in the Scriptures as sinless (1 Peter 2:21-24).

Jesus’ ascension into heaven and Lailat-al-Miraj

Jesus’ ascended into heaven after He rose again from the dead glorified.

After he [Jesus] said this, he was taken up before their very eyes, and a cloud hid him from their sight. They were looking intently up into the sky as he was going, when suddenly two men dressed in white stood beside them. “Men of Galilee,” they said, “why do you stand here looking into the sky? This same Jesus, who has been taken from you into heaven, will come back in the same way you have seen him go into heaven.” (Acts Chapter 1 verses 9-11)

The difference is striking: Muhammad is dead and now descended into the grave. Jesus is alive and in heaven. My Muslim friend, why follow the words of a dead prophet when you can follow the Word of the Living One?

Did the Qur’anic Injeel ever exist? The Gospels were revealed after Jesus ascended into heaven (Quran 5:46-47)

To learn more about the Life of Muhammad from a Muslim perspective check out the following videos from Amr Khaled, one of the most famous Muslim preachers in the world.