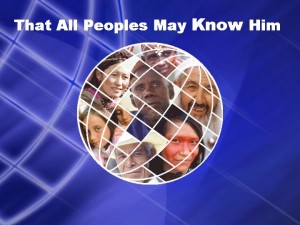 Bassam Madany has great biblical insight to Christian Missions.  His recent article, “Incarnational Missions?“, is no exception.  Bassam argues that Incarnational Missions is a new buzz word that evidences a lack of biblical method in reaching other cultures with the Gospel.  Bassam says the  term “Incarnation” should be reserved for what Jesus has done, and not what the church does. 1The word incarnation is a Latin word meaning “en-flesh-ment”.  In Christianity it refers to when God the Son became a man (John 1:14).  As the Son of God, Jesus has always been God.  Yet, a little more than 2,010 years ago, the Son of God, remaining God, became what He was not, a man.  It is a mystery we cannot fully understand.

Bassam explores the importance of  the Word of God in Missions AND the work of the Holy Spirit in bringing about conversions.  Men and their methods cannot make born again Christians.  Only God the Holy Spirit can grant a person new life from above (John 3:3).  If the church does not see many people coming to faith in Jesus, the answer is NOT to rely less on God’s inspired Word and more on the cleverness of men.

Bassam notes that the early centuries of Christian Missions was through the means of the deep faith of itinerant preachers coupled with their proclamation of the Gospel.  God the Holy Spirit blessed this by converting countless men and women in the Roman Empire.  Bassam Madany reminds us,

No trendy missiological clichés encumbered their joyful teaching and sharing of the message of Christ with neighbors and friends. This spirit of utter devotion to the Lord Jesus Christ enabled the early Christians, to accomplish marvels. Many have since followed in their footsteps. They may not always have known success as some modern missiologists define it, but whatever failures they are judged to have been a part of, should not be blamed on their inability to incarnationalize the Gospel. They knew the incarnation was unique to our Lord and not something that could be conceptualized into a pattern easily imitated and continued. They were more interested in holding to a high view of Scripture, its translation into the languages of the cultures in which they ministered, and the sovereignty of God over its success in converting souls to the Glory of God.

Bassam Madany’s article is not only about biblical methods, but contains inspiring stories of Bassam’s interaction with missionaries of a previous generation, their love for Jesus, and commitment to bring the Gospel to the ends of the earth.

The one area I would have been helped further is if Bassam Madany discussed the role of the Holy Spirit in giving wisdom to apply biblical methods in different contexts.  It seems that three things need to be considered when discussing Christian Missions, methodology, wisdom, and results:

Bassam Madany discussed #1 and #3.  However, I would have been helped by more discussion of #2.  Success and failure cannot be determined only by results: #3.  However, there is nothing inherently wrong when results lead the church back to steps #1 and #2.