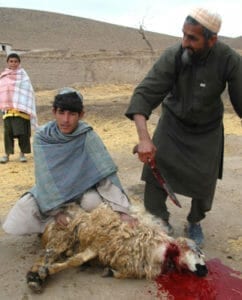 This week, Muslims on hajj will be celebrating Eid al-Adha (عيد الأضحى), the Feast of Sacrifice.  Tens of thousands of sacrificial victims, mainly sheep and goats, are sacrificed in memory of Abraham’s offering up his beloved son (Genesis 22).  It is usual after the sacrifice to have the head ritually shaved or the hair cut short.  This hajj feast is mentioned in the Quran: 1Sacrifice of animals is mentioned in Surah-Al-Hajj 22:34, وَلِكُلِّ أُمَّةٍ جَعَلْنَا مَنسَكًا لِّيَذْكُرُوا اسْمَ اللَّهِ عَلَىٰ مَا رَزَقَهُم مِّن بَهِيمَةِ الْأَنْعَامِ ۗ فَإِلَٰهُكُمْ إِلَٰهٌ وَاحِدٌ فَلَهُ أَسْلِمُوا ۗ وَبَشِّرِ الْمُخْبِتِينَ – 22:34
SAHIH INTERNATIONAL
And for all religion We have appointed a rite [of sacrifice] that they may mention the name of Allah over what He has provided for them of [sacrificial] animals. For your god is one God, so to Him submit. And, [O Muhammad], give good tidings to the humble [before their Lord]

Quran 2:196
And accomplish the pilgrimage and the visit for Allah, but if, you are prevented, (send) whatever offering is easy to obtain, and do not shave your heads until the offering reaches its destination; but whoever among you is sick or has an ailment of the head, he (should effect) a compensation by fasting or alms or sacrificing, then when you are secure, whoever profits by combining the visit with the pilgrimage (should take) what offering is easy to obtain; but he who cannot find (any offering) should fast for three days during the pilgrimage and for seven days when you return; these (make) ten (days) complete; this is for him whose family is not present in the Sacred Mosque, and be careful (of your duty) to Allah, and know that Allah is severe in requiting (evil).

Muslims should stop and take the time to read the account of Genesis 22 which records Abraham’s offering up of Isaac. 2The Concise Encyclopedia of Islam says, “It is usually accepted in Islam that the sacrifice was to be of Ishmael.” However, the Quran is not clear as to who was offered up (Quran 37:107) and dozens of early Quranic interpreters conclude that Abraham offered Isaac.  This is an important account for many reasons and raises questions such as:

Thinking Biblically and Historically about Abraham and Eid al-Adha

Why would God command Abraham to do something that is seemingly immoral?

The answer is to be found in understanding that child sacrifice was an integral part of Israel’s redemption and Old Testament worship.  It is found in such places as:

Your father Abraham rejoiced at the thought of seeing my day; he saw it and was glad (John 8:56)

thoughts on “Eid al-Adha and Abraham”