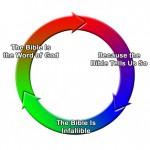 Are we stuck in a circular stalemate? No, and here are two reasons:

The historical fact of Jesus’ death on the cross

The first reason is that Muslims believe something about the crucifixion of Jesus based on what Muhammad recited but never observed. Christians believe in the death of Jesus on the cross because this was an event rooted in history.

If the beliefs of Muslims are rational (i.e. Muslim beliefs correspond to the world in which we live), then they need to stand on solid historical ground and not just on the unclear lips of Muhammad.

The Quranic Injīl and the Christian New Testament

The second reason we are not stuck in a circular stalemate is that the Quran says that a book from heaven was given to Jesus (Injīl) and Jesus gave this book to His disciples.

Muslims argue that the Christian gospels and New Testament is corrupt because it is not the same as the singlular Injīl given to Jesus from heaven. The twenty-seven books of the New Testament were written years after Jesus ascended to heaven. Many Muslims–including paraphrased translations of the meaning of the Quran–conclude from this that the Injīl has been lost.

However, the reality is that the Injīl never existed. Jesus never received a book from heaven and He never gave a book to His disciples. Muslim belief in the Injīl is itself circular:

How do Muslims know the New Testament is corrupt?
Answer: The Quran’ic claims about the Injīl given from heaven to Jesus.

What is the proof that the Injīl existed?
Answer: The Qur’an.

The Quranic Injīl is an attempt to corrupt the New Testament.

Islam claims you gave testimony to Allah before you were born (Quran 7:172). Is that true? Is this why Muslims don’t believe we need a Savior?

The Quranic claim about the Injeel is a corruption of Scripture