The 99 Names of Allah in the hadiths and Quran 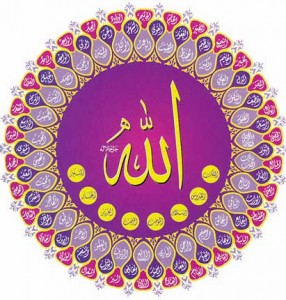 Allah’s Most Beautiful Names in Arabic

In a hadith recorded by Sahih Muslim, Muhammad is reported to have made reference to the 99 Names of Allah,

There are ninety-nine names of Allah; he who commits them to memory would get into Paradise. Verily, Allah is Odd (He is one, and it is an odd number) and He loves odd number. And in the narration of Ibn ‘Umar (the words are):” He who enumerated them.” (Sahih Muslim 35:6475).

While the Quran makes no explicit mention of “99 names” – the Quran does mention invoking Allah with the “most beautiful names“, “The most beautiful names belong to Allah: so call on him by them; but shun such men as use profanity in his names: for what they do, they will soon be requited” (Quran 7:180).

Al-asma al-Husna (أسماء الله الحسنى) is Arabic for The Most Beautiful Names.  According to the Encyclopaedia of Islam,

“The meditated recitation of these Names became one of the most diligent devotions in Islam.  The pious Muslim repeats them and meditates on them, usually with the help of the 99 beads of the subha (“rosary”) except for the Wahhabis, who object to this custom as being a reprehensible bid’a (“innovation”)…[T]he traditional 99 “most Beautiful Names” do not exhaust the list of all the Kuranic Names; on the other hand, some of them do not occur ad litteram in the Kuran.  As a result, the list was not always absolutely fixed and was liable to contain variants. It does not suffice, therefore, to settle the entire question of the divine Names. But the place held by this recitation in Muslim piety gives it an outstanding importance. It expresses clearly enough the pious Muslim’s faith in God, and what the supreme Name Allah, which, in itself, recapitulates all the others, means for him” (L Gardet, Encyclopaedia of Islam, “The Most Beautiful Names”).

The 99 Names of Allah taught by Amr Khaled (عمروخالد): Allah the One and Only (Episode 3) 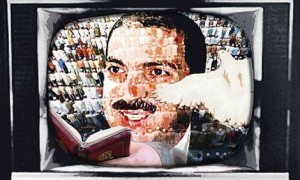 Here is the third episode.  Last time we left off with Amr Khaled giving his fourth proof for God’s Oneness: The integration of everything in the Universe:

Amr Khaled says, “plants take in CO2 & give out oxygen to keep the ratio of each fixed.”  Had there been two deities, this would not have been the case…” [there are video problems here]     “While collecting nectar, the bee helps carry pollen grains moving them from the male plant organs to the female plant organs, causing the fertilization of plants to reproduce and provide food for Man.  Only God can create this harmony and integration between various creatures.  God has willed this integration of diverse creatures to exist so Man can realize the Oneness of God.  Many creatures are involved in such processes!  In the water cycle, the Sun causes sea water to evaporate and the wind carries vapor high in the sky forming clouds, then the law of gravity causes rain to fall down on earth!  God could have caused the rain to fall without these processes, but He created this integration so Man may know God is the One and Only.”

Amr Khaled says,”True, there is no deity but God, the One and Only.  This is as far as integration in the Universe is concerned.  Also there is wonderful integration between the amount of food in the Universe and Man’s needs for food.  If there has been 2 deities, one responsible for providing food, the other responsible for creating creatures, the food might have been unsuitable for our body needs!”    “Also God created in Man a digestive system that enables Man to digest the food available on the Earth.  God created Man and created the food he needs created integration between food, the body needs and the digestive system.  Who created integration between the needs of plant roots and the soil?  This wonderful integration proves there is One and Only Creator!  This integration proves one fact: There is no deity but God!  Do my words make sense or not?”    “Apart from being Muslim and believing in God…Praise be to God.  Muslims worship God, the One and Only, but consider my words logically!”

Amr Khaled says,”Here is another point which may sound funny, yet proves that there is no deity but God, the One and Only, no creature has assumed divinity!  Some claim that there may be deities other than God, the One and Only, but these so-called deities have never assumed divinity!  “(God)…said to it (the heavens) and to the earth: ‘Come willingly or unwillingly!’  They said: ‘We come in willing obedience.'”  Has any other being revealed a similar verse?!  Has anyone else claimed this to the heavens and the Earth?  If no creature has done so, why claim there are deities other than God?!”    “Ibn Al-Muqaffa’, and Arab man of letters, [there are video problems here]… He confined himself to a room, trying to come up with verses like the Qur’an’s!  He came out one day later, asking how he could possible come up with words like those in this verse that describes Noah’s Flood: “And it was said: ‘O earth swallow your water, and O sky cease your rain!’  And the water abated and the Command was fulfilled, the Ark came to rest upon Mount Judi…”  Ibn Al-Muqaffa’ wondered who could order the mountains & waters on Earth except God, the One and Only, Who has subdued them!  Who, other than God, could force the Universe elements to obey His Orders?  These are signs proving that there is no deity but God!  They are some of the Signs of God’s Oneness for those who would like to use their intellect to reach the Truth.”

“Before I talk about God, the One and Only, addressing the believers, I would like to recite some beautiful verses from “The Ants” Chapter.”

“One can see that these verses address the mind, God says: “Say: ‘To whom belongs the earth and all that is in it, if you know?’  They will say: ‘To God’, Say: ‘Why then are you not admonished?’  Say: ‘Who is the Lord of the seven heavens and the…tremendous Throne?’  They will say: ‘God’, say: ‘Why then are you not God-fearing?’  Say: ‘In whose hand is the Dominion of all things and who protects but is not in need of protection, if you know?’  They will say: ‘To God’, say: ‘How then are you deluded?’  But We brought them the Truth and they are indeed liars.  God has not begotten any son, nor is there any deity with Him; [there are video problems here]…Such magnificent logic!  “Glory be to God, High Exalted is He above that they attribute.”  “If there had been in the heavens and the earth other deities but God, both would have been thrown into turmoil, Glory be to God, the Lord of the Throne…!”

Amr Khaled says,”The verse, “He is God, the One and Only’, or ‘There is no deity but God’, does it control every cell in your body?  Do you really live by these words?  Do you feel “There is no deity but God” with your heart and soul?  What does the verse: “He is God, the One and Only” imply?  Let’s try to comprehend and live by it as true believers!”    “It means that God is Unique in terms of Generosity, and Unique in terms of Bounty and He is the Sole Creator.  Never sacrifice His rules for your whims if you truly believe He is One and Only, there is only One God, so never be devoted to anyone but Him!  Since you believe in and worship One God, be devoted to Him alone!  Bilal was tortured in the blazing heat of the desert in Mecca.  The infidels made him wear a hot iron shield so he would suffer from the heat; they laid him on the desert sand then put a huge rock on his body, and lashed him, how brutal!  They did so to make him disbelieve in God, but he said: “God is One & Only”.